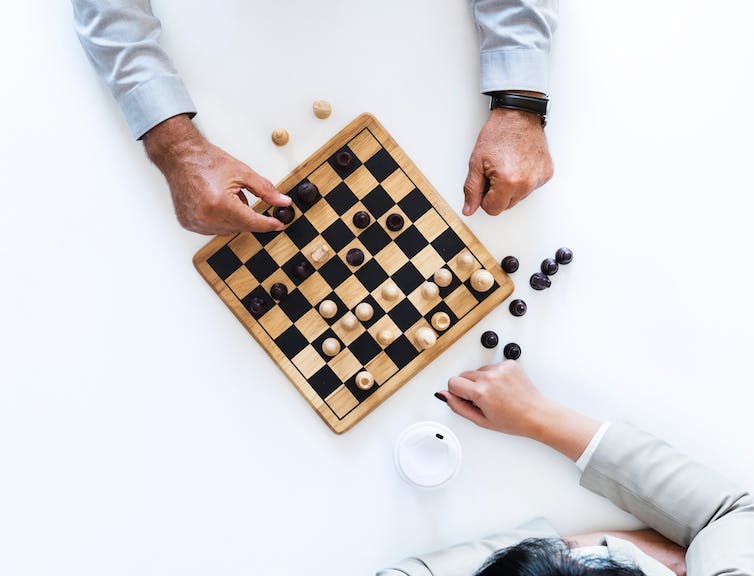 If you engage in cognitively stimulating activities in midlife, such as reading and playing games, you can reduce dementia risk by about 26 per cent, according to research.
(Unsplash/Rawpixel), CC BY-SA

Many people do not want to think about dementia, especially if their lives have not yet been touched by it. But a total of 9.9 million people worldwide are diagnosed with dementia each year. That is one person every 3.2 seconds.

This number is growing: around 50 million people live with dementia today, and this number will rise to over 130 million worldwide by 2030.

You do not have to wait until you are 65 to take action. In the absence of treatment, we must think of ways to protect our brain health earlier. This month is Alzheimer’s Awareness month — what better time to learn how to reduce your risk of dementia, whatever your age?

In my work at Baycrest’s Rotman Research Institute, I address cognitive, health and lifestyle factors in aging. I investigate how we can maintain our brain health, while reducing the risk of dementia as we age. Currently, I’m recruiting for two clinical trials that explore the benefits of different types of cognitive training and lifestyle interventions to prevent dementia.

There are three dementia risk factors that you can’t do anything about: age, sex and genetics. But a growing body of evidence is discovering early-life, mid-life and late-life contributors to dementia risk that we can do something about — either for our own or our children’s future brain health.


Before going any further, let’s clear up some common confusion between Alzheimer’s disease and dementia. Dementia is a term to describe the declines in cognitive abilities like memory, attention, language and problem-solving that are severe enough to affect a person’s everyday functioning. Dementia can be caused by a large range of diseases, but the most common is Alzheimer’s.

Children born at a low birth weight for their gestational age are roughly twice as likely to experience cognitive dysfunction in later life.

Poorer nutritional opportunities that often accompany low socioeconomic position can result in cardiovascular and metabolic conditions such as hypertension, high cholesterol and diabetes that are additional risk factors for dementia.

And low education reduces the opportunities to engage in a lifetime of intellectually stimulating occupations and leisure activities throughout life that build richer, more resilient neural networks.

There is substantial evidence that people who engage in paid work that is more socially or cognitively complex have better cognitive functioning in late life and lower dementia risk. Likewise, engagement in cognitively stimulating activities in midlife, such as reading and playing games, can reduce dementia risk by about 26 per cent.

We all know that exercise is good for our physical health, and engaging in moderate to vigorous physical activity in midlife can also reduce dementia risk.

Aerobic activity not only helps us to maintain a healthy weight and keep our blood pressure down, it also promotes the growth of new neurons, particularly in the hippocampus, the area of the brain most responsible for forming new memories.

Seniors who are at genetic risk for developing Alzheimer’s disease are less likely to experience cognitive decline if they live with others, are less lonely and feel that they have social support.

Read more:
Will you be old and ‘unbefriended?’


You have heard that you are what you eat, right? It turns out that what we eat is important as a dementia risk factor too. Eating unrefined grains, fruit, vegetables, legumes, olive oil and fish, with low meat consumption — that is, a Mediterranean-style diet — has been linked to lower dementia rates.

Along with my Baycrest colleagues, we have put together a Brain Health Food Guide based on the available evidence.

What about Ronald Reagan?

Whenever I present this type of information, someone invariably says: “But my mother did all of these things and she still got dementia” or “What about Ronald Reagan?”

My father earned a bachelor’s degree, was the global creative director of a major advertising firm, had a rich social network throughout adulthood and enjoyed 60 years of marriage. He passed away with Alzheimer’s disease. My experience with my dad further motivates my research.

Leading an engaged, healthy lifestyle is thought to increase “cognitive reserve” leading to greater brain resiliency such that people can maintain cognitive functioning in later life, despite the potential accumulation of Alzheimer’s pathology.

Thus, although all of these factors may not stop Alzheimer’s disease, they can allow people to live longer in good cognitive health. In my mind, that alone is worth a resolution to lead a healthier, more engaged lifestyle.

My Brain Robbie, a fantastic new initiative to promote brain health among school going children, has been launched through the Pilot Awards for Global Brain Health Leaders, an initiative of the Global Brain Health Institute (GBHI), Alzheimer’s Association and Alzheimer’s Society UK. The project includes an animated video of a little brain which helps children learn about the eight steps to keeping our brains healthy, along with free educational resources for parents and teachers.

The My Brain Robbie campaign aims to fill an educational gap in the field of dementia prevention by generating a public health educational initiative for children aged 6 to 12 years. It also aims to increase global public awareness of the importance of brain health across the lifespan, rather than it being considered that brain protection strategies are an issue only for the elderly.

The video and materials bring together the latest scientific research in neurology and epidemiology which encourage early prevention and lifelong healthy lifestyles to mitigate the risk of developing chronic brain diseases including Alzheimer’s disease. Recent studies project that up to 30% of dementia may be preventable by targeting modifiable risk factors. The initiative was developed by researcher, doctor/physician and Atlantic Fellow for Equity in Brain Health at GBHI, Dr. Eleonore Bayen.

My Brain Robbie, which was funded by GBHI and the Alzheimer’s Association, empowers children to maintain a healthy brain throughout their lives by providing them with simple public health messages. Dr Bayen hopes that, by providing information about brain health as part of early life education, this will create a shift in perceptions, beliefs, attitudes and stigma towards diseases of the brain, particularly dementia, in this generation and beyond.

Dr Bayen said: “This pilot arrives at a perfect time in history when the fight against dementia in high, low and middle income countries has become a top priority with an urgent need for innovative actions and “out of the box” thinking in prevention and care. While education at school offers us an amazing opportunity to fight stigma as well as social and health inequities, it appears that ‘dementia prevention and brain health at school’ is currently not being addressed and this would surely improve public awareness worldwide.”

She continued: “We hope that by teaching these important healthy brain habits to a younger generation that this may, in turn, educate upwards through the generations by motivating their parents and grandparents to learn more about the subject of brain health and dementia prevention. It may also, in turn, help to create a more supportive and inclusive living environment for people with neurocognitive disability and to create a feeling of optimism in a field of neurology where there have been limited therapeutic successes. Children are often wonderful teachers for their peers, parents, grandparents, and society at large.”

Dr Bayen worked in collaboration with a wide variety of experts such as neuroscientists, medical and health professionals, education specialists, teachers, parents, communication and design experts, as well as other Atlantic Fellows and faculty from GBHI.

The videos are currently available in English and French with plans to translate these into many more languages. My Brain Robbie welcomes interest from educators, health groups, parenting communities and others in sharing this initiative with as many children as possible.

She was inspired to develop the initiative during her Atlantic Fellowship with GBHI based at the University of California, San Francisco and Trinity College Dublin. GBHI focuses on protecting the world’s aging populations from threats to brain health. Collectively with partners, GBHI aims to reduce the scale and impact of dementia. The Pilot Awards for Global Brain Health Leaders is an initiative launched by GBHI and partners, the Alzheimer’s Association and the Alzheimer’s Society UK. The awards aim to support emerging leaders in brain health protection by funding small-scale innovative activities to delay, prevent, or mitigate the impact of dementia.

“Dr Bayen’s work is a wonderful example of GBHI’s approach to attaining a global impact on dementia prevention. It engages inter-professional contributions to development on a global scale. It also recognizes that brain protection is a life-long dialogue. Her innovative strategy of teaching children who will then engage in dialogue within households to ‘educate-up’ to parents and grandparents while reducing the stigma of dementia is timely.” said Victor Valcour, Executive Director of GBHI and the Atlantic Fellows for Equity in Brain Health program.

Dr Bayen said: “As a researcher and also a physician, I feel that my duty is not only to advance pure science but also to communicate it with others in creative ways. I hope that the My Brain Robbie campaign inspires children to feel responsible for their own brain health and to become aware of others’ brain health too.”

To watch and download the videos and materials please visit www.mybrainrobbie.org

Dr Eleonore Bayen holds a Medical Degree with specialty training in Neurology and a PhD in Health Economics. She specializes in traumatic brain injury (TBI). She has advanced experience in architecting educational intervention programs about brain and disability for patients, family caregivers, and non-medical populations. Dr. Bayen was supported in her Atlantic Fellowship as a Fulbright grantee to the United States and was trained at the University of California, San Francisco site of GBHI in 2016. In this capacity, she was selected to be part of the first international class of the Atlantic Fellows who graduated from the Global Brain Health Institute in 2017. Bayen is currently an assistant professor in neuro-rehabilitation in Paris at Sorbonne University – La Pitié-Salpêtrière hospital.

For most of us caring for our parents or a loved one at home, putting together a home cooked meal can feel like a tough feat. After a busy day at work, it’s so much easier for us to just pick up a takeaway meal at the food centre or just grab some fast food for the whole family.

For care staff that may have residents or clients who are caring for older Asian living in residential or community aged care facilities, fellow nurses have shared that sometimes, trying to figure out a healthy, delicious and easy Asian meal may be challenging. Most of the time, it is easier to just dish up what’s available, or get meals on wheels, and for clients, it may be a lamb roast, fish and chips, casserole, not something that residents or clients may be familiar with. It’s not difficult to understand why residents/clients may start losing weight or their appetite.

Finding good quality Asian food can be tough and studies have indicated that eating out may not be the best for our health. Food prepared commercially usually contains a high amount of saturated fat, carbohydrates and sodium. For many older adults, this may not be ideal, taking into consideration the multiple co-morbidities that they already have. For caregivers, after a long day at work, a high fat, high carbohydrate and high sodium meal, though tasty, may not be ideal for the body in the long term. This may also make us feel sluggish and tired, instead of rejuvenated after a good nutritious meal. Below are some quick and easy Asian recipes that are clean and healthy.